In 2018, I attended a three-month residency in the Eastern fjords of Iceland. For the two years prior, I had worked to secure a location and the necessary permission to make a petroglyph so I could hit the ground running once I arrived. Getting permission took a long time, but the carving turned out well and was well received by the local residents, facts that made the letter I received upon returning home all the more surprising.

Most artist residencies are predicated upon supporting artists, but this particular residency is predicated upon artists supporting the residency. Despite my efforts, I had not received permission to carve by the time I arrived, so the first day I hiked around, staked out the best rocks, and submitted my proposal, thinking it would take about a week to get permission from the municipality and the landowner. After a week passed, however, the residency informed me that the land was owned by 13 family members, so permission might be impossible.  The second week I found other, smaller rocks, submitted another request, and set to waiting again. This residency was my only scheduled carving time in 2018, so Iceland was not a vacation, and the idle time was a stressful bummer. I proposed that we pursue the 13 family members, and ultimately, the residency got all 13 to sign a permission form. This accomplished, the municipality said no permit was required because I was not building any structures, so after more than two weeks I began work.

For the remainder of my time there, I worked long days, six days a week,. The piece came out beautifully. I carved a man riding tölt on an Icelandic horse, and an array of local birds. A local journalist wrote a blog post about the opening.

In Stöðvarfjörður, a rider from Fáskrúðsfjörður became a rattling horse which became the main subject of the work. Around the rider and the horse are smaller images of cherry, seagull, loo and grouse. – Kristborg Bóel Steindórsdóttir 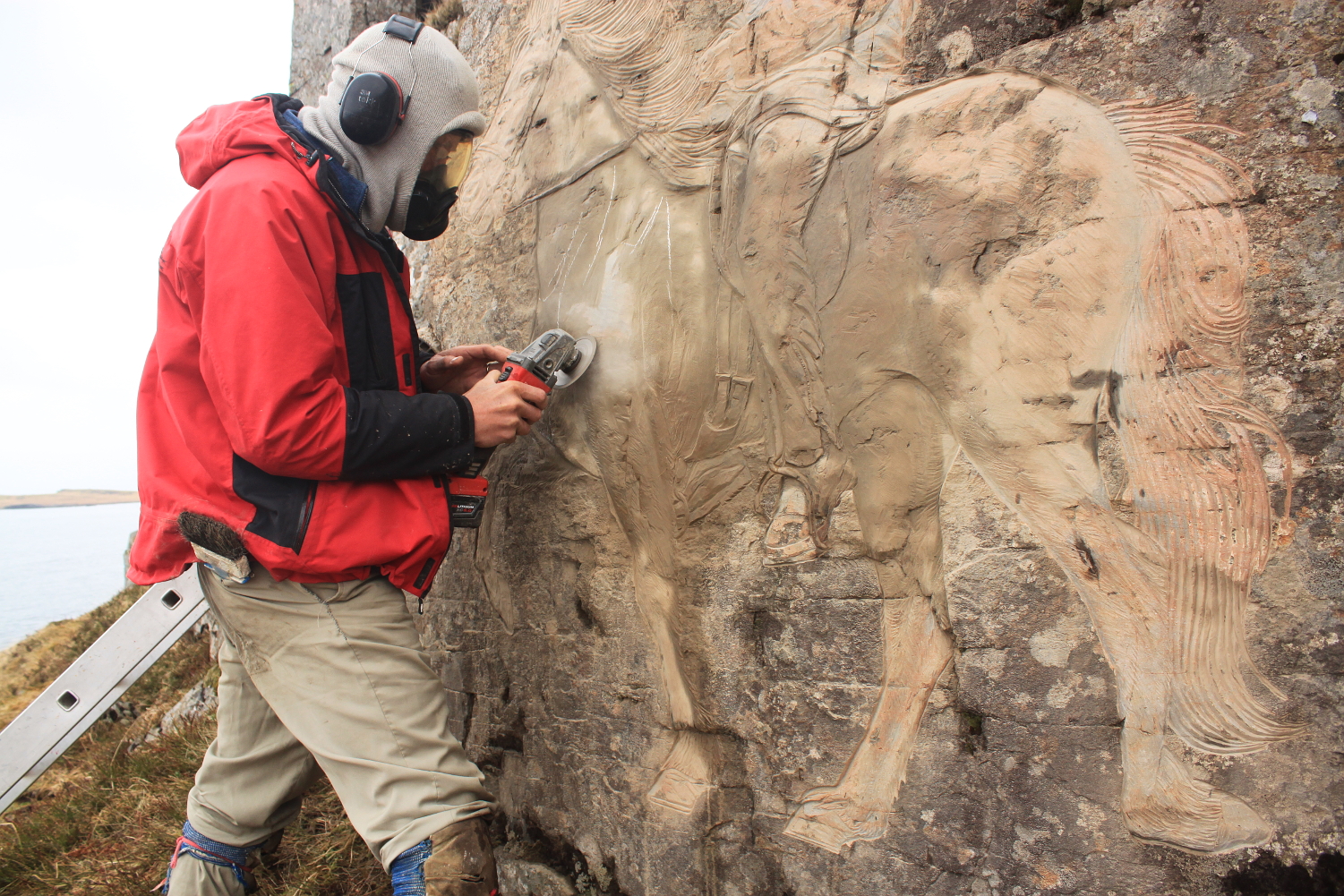 The regional reporter for RUV, Rúnar Snaer Reynisson, saw Kristborg’s piece and one rainy day a TV reporter came and filed this piece.

The New York rockery (sic) worked for two and a half months to carve the miniatures into a cliff in Stöðvarfjörður. He says that there is a great deal of responsibility and therefore he seeks the subject in human life and nature on the spot. 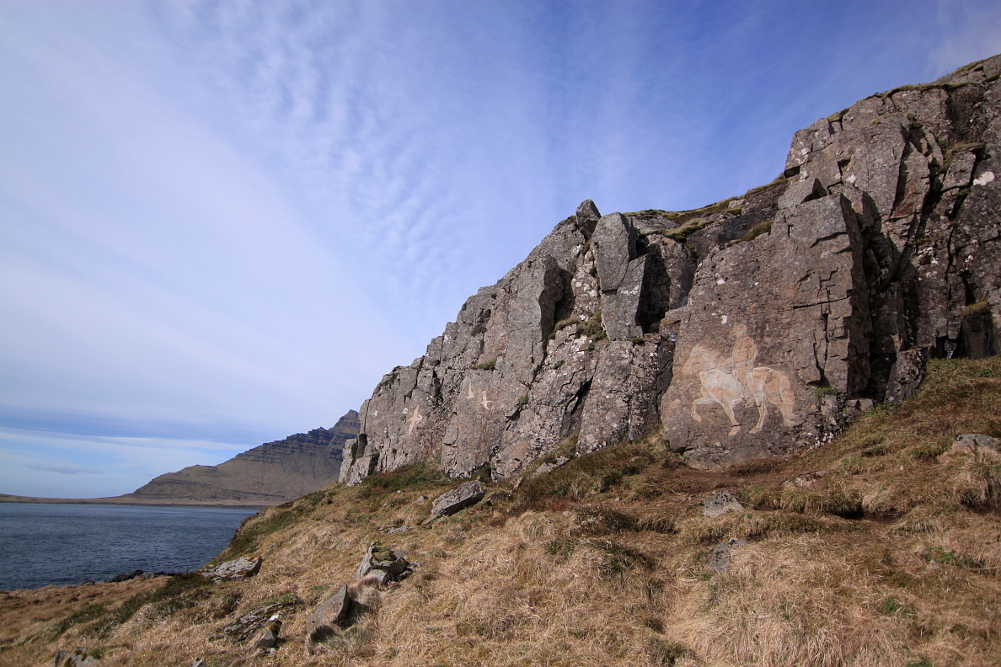 Like everyone, I just want to be on TV, but the story ran hours after I flew back to New York, so any brush with fame on the streets of Iceland eluded me.  The National Environmental Agency on the other hand, did see the story, and they were not pleased.

When I got back to America, I immediately began making large prints from a mold of the Icelandic horseback rider for a show in September at Project:ARTspace. I received considerable support from the Bucks County, PA arts community, particularly artists Annie Parham, and Cayley Plutnick. The prints were seven feet square and the best paintings I have ever made. 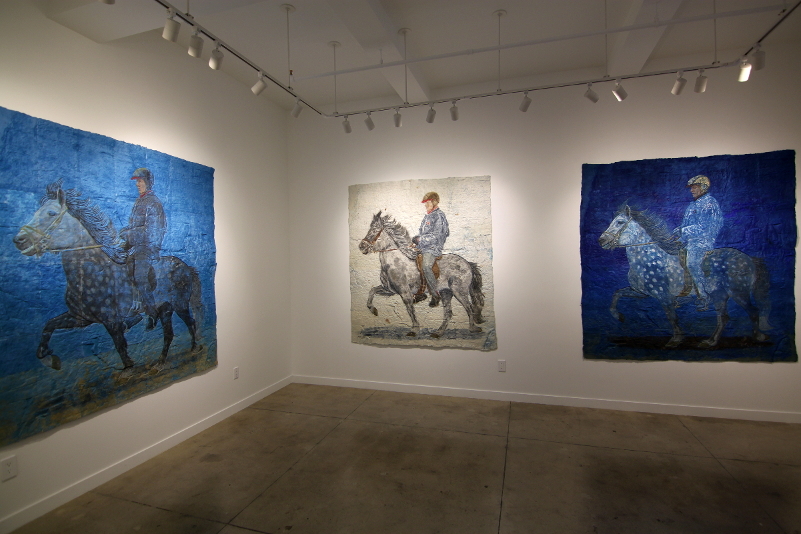 After the show opened I took my first rest since June, and I called my father who said he received a piece of mail for me from Iceland. The parents of artists get a rough deal, so all I want is for him to think everything will turn out safely and well for me, but as he read the letter his concern was obvious. The National Environmental Agency was writing to say they saw the RUV piece, recognized I had permission from the landowner and the municipality,  but the law said people could not mark the nature at all, and if they deemed my markings very offensive, the punishment was 2-4 years in prison.

The agency’s letter states that Sudeith could be sentenced to pay a minimum of ISK 350,000 a fine or even up to four years in prison.

I had heard Icelandic prisons are pretty nice with TV’s and cellphones, that they do not lock you in (it is the state’s obligation to hold you), and that if you break out you do not get extra time, but still….Thanks to a patron who is an attorney we got it worked out. The punk rock mayor of the municipality took the bullet for me, and since I was acting in good faith they decided not to prosecute.

“We are at least pleased with the Environment Agency’s decision not to take any further action as this would have affected the third party who was the artist working there in good faith with the permission of the landowner and the municipality. People just think it’s beautiful and it’s not for anyone, as it is not visible from the road, it is just a beautiful work of art, ”says Karl Óttar, the Mayor of Fjarðabyggð

I proposed a reprise to carve more birds, but I have not had any response…..Someone once told me that the key to a successful documentary is controversy and a celebrity narrator.

Documenting extirpation and extinction are interesting, for they mark time uniquely. These ancient pieces illustrate this point well.

If these rock paintings show realistic drawings of megafauna it informs what we know about humans and now extinct species.

For example, these megafauna paintings could be 40,000 years old

This paper is a deeper dive, with cool photos

Until recently, I used Ghostery to block web bugs, but it turned out to be a data aggregator in the guise of a privacy tool, ouch, so I switched to the Electronic Frontier Foundation’s Privacy Badger to block web bugs.

Javascript gives trackers potent tools. Chrome allows you turn off javascipt altogether, but that breaks most of the internet. Chrome does not allow users to turn on Javascript in a granular way, so I use Firefox with the excellent, open source tool called No Script. No Script shows all the scripts that are trying to run (you may be amazed at how many there are), and it allows a user to turn on specific scripts to facilitate functionality without allowing unfettered access to your browser and computer.

Using Https, rather than http, offers privacy benefits by cutting out the middlemen. The Electronic Frontier Foundation, offers another browser extension that forces encrypted connections called HTTPS Everywhere. It is mostly applicable to Firefox, and it is installed as an extension.

Blocking ads makes the internet a much more aesthetic environment, and there is one truly good tool for blocking ads, AdBlockPlus.

AdBlockPlus is also an extension, and it has many copycats, so beware. The real tool has ABP in a stop sign and it is published by Eyeo

The Domain Name System, or DNS, is a great way to track users. DNS converts human readable names, like Facebook.com into numbers like 66.220.144.0.

Changing DNS is a little more technical than installing a browser extension, and two services offer an alternative to letting ISPs watch everywhere I surf, OpenDNS and Cloudflare.

Using an alternative DNS often speeds up the internet, as it routes web traffic through their servers rather than V*rizon, C0mcast, or whomever. For some years I have used OpenDNS, but they were bought by C!sco, and their vibe changed, but their service is still good for home users.

On April fools day, Cloudflare announced a new DNS service, which also promised to speed up internet service, so I installed it on the router at my temporary home, and it works great.